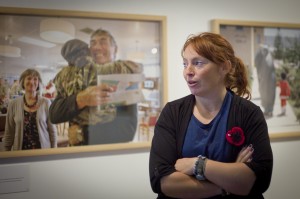 A most enjoyable day today – starting with a few hours shooting around South Bank (although the light was absolutely filthy again), but I think I have a few more shots for my Pinhole London project.  We spent a very pleasant afternoon at the OXO Gallery with Ali Baskerville ARPS, who talked us through her White Picture exhibition – an absolutely fascinating insight into the life of women in combat in Afghanistan.  It was a private tour for ten DVJ members, but as we moved around the numbers swelled as other people tagged onto our group.  I decided to capitalise on this and was going to ask the extras to make a contribution to the British Legion charity box that had been strategically placed by the Poppy Tray, so attempted to pick it up with a view to passing it around.    Unfortunately, it was chained to the desk, and as the receptionist caught my eye, it all began to look rather suspicious…  Anyway, it is a fabulous exhibition and runs until the 11th November at the Gallery@oxo.  See here for further info.  Hmmm, haven’t quite mastered this linking business yet – try this instead: google “white picture” + “British Legion” and it will take you straight there.

I’m sure Ali won’t thank me for today’s picture, but it was the only one I could get without the madding crowds in front of her!