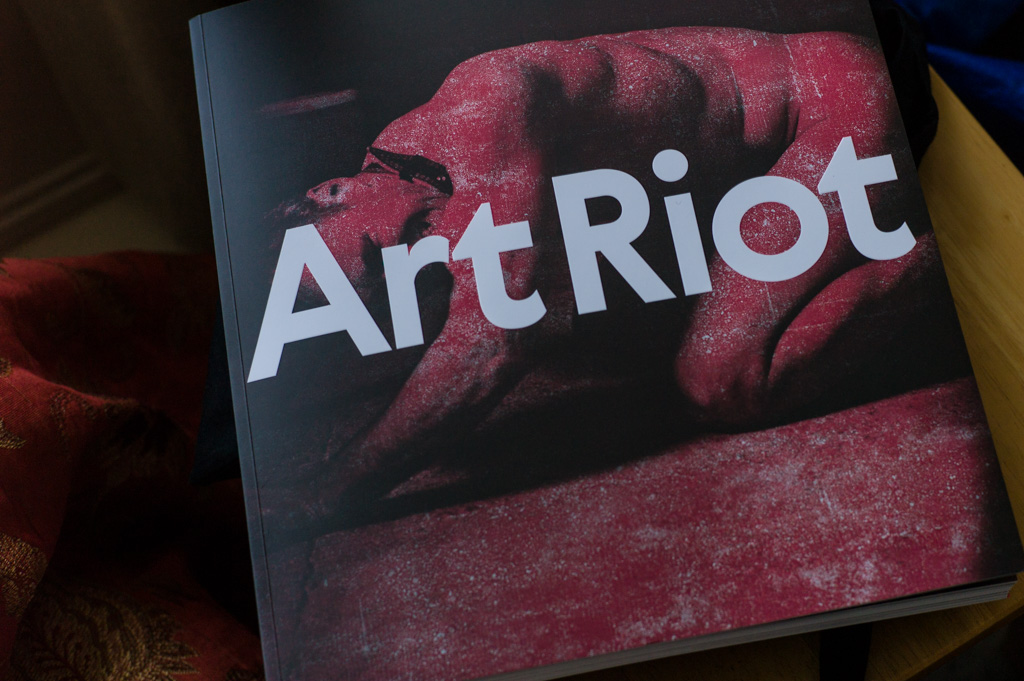 ”I somehow can’t imagine any of the men in red corduroy trousers nailing their balls to Duke of York Square to make the world a better place.

I’ve always admired people who are willing to suffer for their art or their principles because I’m such a wimp and probably wouldn’t go very far to protect either if pain were involved.   Pyotr Pavlensky is not a wimp, he’s a performance artist who seems prepared to undergo the most excruciating pain to protest against the Russian political system.  So far, he has sliced off an ear, sewn up his lips and nailed his scrotum to Red Square … (a Reuters re-enactment shows how he did it this with a ten inch nail).  But he’s not the only artist that’s been to extraordinary lengths to highlight the lack of freedom in Russia, both personal and artistic, as the visitor to the Saatchi Gallery soon discovers.

Dedicated to Russian Protest Art, Art Riot: Post-Soviet Actionism is a gritty exhibition that includes photographs, paintings, posters, films and memorabilia with contributions from Pavlensky, Oleg Kulik, Arsen Savadov and Pussy Riot inter alia.  It is an unnerving show, but hypnotic and thought-provoking.  With the help of the £1 leaflet, it’s pretty self-explanatory, but now having read the accompanying book, I feel the need for a second visit in order to really appreciate the acuity of the art as an allegory for a broken, oppressive system.

As I stepped out of the dark world of suffering and humiliation, I was struck by the awkward contrast with the Chelsea world of Christmas lights and shoppers, already laden with designer bags, rushing to their next retail experience or lunch.  I somehow can’t imagine any of the men in red corduroy trousers nailing their balls to Duke of York Square to make the world a better place.