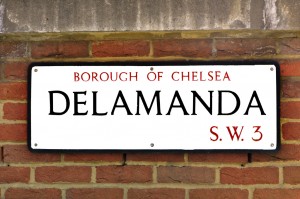 Sometimes, you come across an idea that is so brilliant, you’re cross you didn’t think of it yourself. The nursery rhyme shot by Martin Wilson is one such idea. This is my homage to the great Mr Wilson, although my modus operandi was slightly different: I used digital, not film; mine took hours, not months and I used Photoshop and it’s still not a patch on the real thing! It was a very interesting observational exercise, from which I learned: The street signs are quite sloppily painted (the raggedy edges are not the result of a botched Photoshop moment, they are actually like that); some signs say ‘Borough of Chelsea’ whilst others say ‘Royal Borough of Kensington and Chelsea’ and the older signs have a slightly different font.