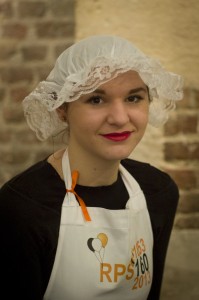 The tension is building as the 24 hour shoot is about to get underway. 1853 costume was an optional extra, and, disappointingly, not an option that many chose. However, Izzi (niece and youngest participant in the Shoot) entered into the spirit of the thing and, along with Wilcey (her mother) came dressed as a Victorian housemaid. Wilcey’s a bit good at all things arty and crafty and so designed these transfers for the aprons, leaving no-one in any doubt that the duo of housemaids belonged to our party. Hats off to them – they wore their costumes for the whole shoot, and indeed ‘hats off’ after half-an-hour was essential, as they were in danger of knocking Big Ben out of the number one spot of the “most photographed in London” list. Congrats as well to Helena and Gilbert – both very elegantly dressed in Victorian attire. Thanks to Walter Benzie ARPS (Society Treasurer) for shooting the firing pistol and seeing us off with a wave, some jolly words of encouragement and a look of relief that he was going to be spending the night snuggled under a warm duvet.