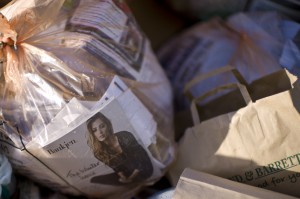 The most fabulous light today and I just wish I’d had more time to be out and about snapping.  Tuesday is rubbish collection day and so there are always some interesting subjects around.  I don’t want to be labelled as a scavenger, but I did get close today.  As I walked past one of the grander houses, I noticed that someone had thrown out a rather nice wicker basket/box/storage case and I was so tempted, but while I was making up my mind, the refusal disposal operatives appeared and I scurried off in the other direction.  I don’t know whether taking rubbish is a crime or whether it would just be considered as re-cycling.  Some houses have these clear orange bags, so the casual observer can deduce a lot about the inhabitants of a particular dwelling as we can see what gets thrown away.  This pic appealed to me as it looks as though she’s trying to escape from the heap.