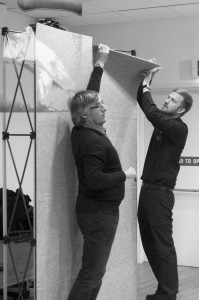 Well this is not my best picture of the day (that was a rather nice evening shot of Baker and Spice) but this is the one by which I want to remember the day.  It was the first London event – An LRPS Assessment Day  (held at the fantastic National Army Museum).  This is Nick and Ben dismantling the stand.  Just faintly in the corner, you might spot the white gloves.  I had the honour of wearing the white gloves and holding the prints as they were put on the stand.  There were some stunning images and I managed to resist the temptation of saying “Wow” as some of them went up.  I also resisted the temptation to do a Marcel Marceau impression as that would not have been seemly.