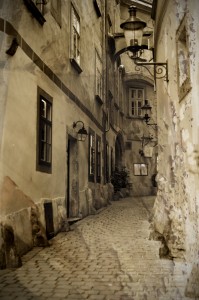 I say possibly, since in all the years I have traversed this alley, I have never known its name, so I looked at Google maps and it could be Griechengasse or Hafnersteig.  Griechengasse would make sense, since the building at the end is the Griechen Beisl, which used to be one of my favourite restaurants.  I say “used to be” because since its expansion, it doesn’t have the same atmosphere of old, and indeed if one is unfortunate enough to be given a table upstairs in the new bit, it feels like sitting in the front room of a very modern semi.    I seem to remember a vague tale concerning the Griechen Beisl and a Dudelsackpfeiffer (bagpipe player).  Allegedly, he got so drunk there, that he passed out on the streets and was scooped up as being dead and buried with the other paupers in a mass grave (obviously this was hundreds of years ago – not last week).  On waking up with a thumping hangover the next morning, he played his bagpipes until someone came to rescue him, scaring the wits out of everyone around in the  process.  I feel that this must be an apocryphal tale, since I can’t believe that his Dudelsack would not have been confiscated as payment for the burial.  Anyway, moral of tale … if you’re going out to get blotto, don’t leave home without your bagpipes.