With Nano over for 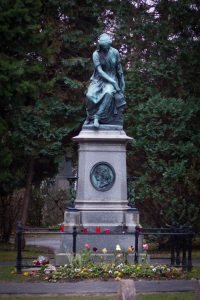 another year, I feel quite bereft. I already miss the excitement of writing 1670 words a day and being rewarded by the incentive badges, and I definitely miss the playlist as I’ve made some interesting new discoveries recently.  I’ll just have to find reasons to keep the playlist going.. .  And a good one for today is the anniversary of the death of Mozart, who died on this day in 1791.

The picture is of Mozart’s grave, possibly.  He was buried in a mass grave and I’m not sure whether his remains were later fished out and buried separately (and if so, how did they know they were his?) or whether this monument is an approximation of where the paupers’ grave is.  Either way, it’s from the Friedhof Sankt Marx, rather than the Zentral Friedhof, where there is a splendid monument (pictured left) but no body.