The Pleasure of Hope

My first day of my first NaNo (#NaNoWriMo2016) and NaBloPoMo and I am utterly and totally exhausted.  I’d like to say it was because the phantom pen has been working a long shift to get a good start to the novel, but I’d be lying.  I just think it’s the excitement intermittently pricked with moments of panic.  Anyway, I reached my daily goal by 8.00 this morning (I’m not going to be super ambitious, 50,000 will suit me very nicely) and I’ve registered 1677 words.  I actually penned a few more, but I’ve tucked them away in the ‘reserve fund’ for the days when I won’t have much time.

‘Just doing it’ is an interesting experience, and I really enjoyed it, although the quality is a tad suspect.  I thought it was great when I first penned it, but a few re-reads later on the bus and …  well, we’ll see where it goes …  Anyway you can decide for yourselves at the weekend when the first chapter will be available either here on the blog or delivered straight to your inbox if you sign up for the Phantom Pen newsletter. 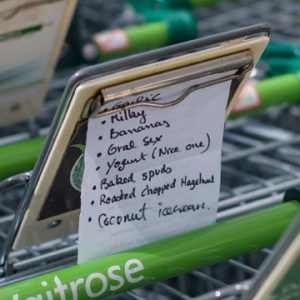 t comes close at points) and I do think it’s marginally more interesting than a list of groceries, apart from this one that I found recently in the Waitrose trolley park.  The mind boggles as to which department is providing oral sex – is this a private arrangement behind the croissants, a little extra on the meat counter or a special offer that I missed? And does it have anything to do with the bananas and coconut ice-cream or are they all disconnected?

But back to the novel.  The preparation so far … I have a working title Hot Stuff.  There is a basic plot with a sub-plot.  I’ve divided the novel into thirty sections and then grouped those into chapters.  I’ve got some ideas about characters (thank you to all of those who have volunteered for a role) and settings (driven by where I’m going to be in November) and I have a song or two for each section.  There’s plenty of coffee in the larder and some rather fine Cognac for the late night penning.  What more do I need?

Creative writing is very different from academic writing.  I’m loving the concept of just writing without much idea of where it’s going, although that is both a strength and weakness.  There is an immense sense of freedom and a feeling of power that I can steer this in any direction I want, but there is also the fear of sending the characters up a blind alley.  It is joyous not to have to worry about whether I’ve read every word that has already been written on the subject, or whether I’ve overlooked any citations.  And it is completely joyous to just make things up (of course, that never happens in academia …).

I’m making notes about everything I see and do in the normal course of the day in the hope of weaving them into the story.  The pic is a sneak preview from today’s notes … every character loves a traditional champagne cocktail served in a proper champagne saucer, don’t they?  But which of my characters will have the pleasure?

The Pleasure of Hope from The Jewel by Pendragon