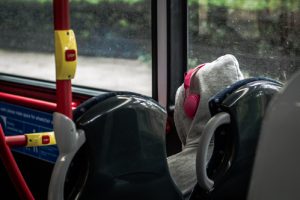 The novel is coming on apace.  I uploaded another 2,522 words this morning bringing my total to 35,172.  My right hand is feeling comfortably numb because most of those words have been written in fountain pen, as I do most of my writing between meetings and on the bus (and in Parisian cafes).  The number 11 has become my muse. The number 11 is a constant source of inspiration.  If I need a character, I simply look up to see who’s sitting across the aisle.  The City gent looking very dapper on first glance and then I realise he’s wearing his pyjama jacket instead of a shirt.  What’s his story?  The young man with his boom box, disturbing all the passengers, who – being frightfully British – respond with a few tut-tuts and Paddington like hard stares.  The young girl wearing a purple artful dodger cap and national health glasses that make her eyes look ‘wide as a football pool’.  Getting the right description for your characters is challenging.  ‘The tall, dark, handsome stranger’ just isn’t enough.  The clever writers convey the essence of their character in a few words, but their choice of words is so stunningly apt, that the reader can see the character straightaway, which is all a build-up to the excuse to quote one of my favourite poems from school, where the reader is left in no doubt as to the physique of young Timothy:

Timothy Winters comes to school, With eyes as wide as a football-pool, Ears like bombs and teeth like splinters: A blitz of a boy is Timothy Winters.
His belly is white, his neck is dark, And his hair is an exclamation-mark. His clothes are enough to scare a crow And through his britches the blue winds blow. (Charles Causley)

And if I need a bit of dialogue, the number 11 bus is perfect for eavesdropping. Now that everyone has a mobile phone, there is no shortage of one-sided conversation:   ‘I’m leaving you.’; ‘I’ll be late home.’; ‘Do we need cat-food?’; ‘Sell Japan, re-invest in bonds …what? … must I? …. [sotto voce] … Daddy says goodnight to Teddy.’  Yes, there is an entire novel between Fulham Broadway and Liverpool Street.

I’ve also been doing a bit of surfing ready for tomorrow’s writing marathon … Victorian explorers, Edward Fitzgerald and taxidermy.  Did the Victorians stuff the animals and then bring them back or did they bring them back and have them stuffed here?  I still don’t know.  However, I probably know more about the subject than I need to know for novelling purposes, but ‘time spent in reconnaissance is never wasted’ as they say.  In taxidermy circles, I have learned that the term ‘mounted’ is preferred to ‘stuffed’, the Victorians had a whole thing going of putting animals in human situations to play croquet etc. , known as anthropomorphic taxidermy and the lack of stuffed humans has more to do with the make-up of their skin rather than any moral, legal or ethical considerations.  #shudder#

And today’s inspirational quote:  ‘Our life is frittered away by detail … simplify, simplify.’ (Henry David Thoreau)

Comfortably Numb from The Wall by Pink Floyd