Down The Dolce Vita

Did I mention I was going to Paris?  The French know how to enjoy a bit of the dolce vita – or la belle vie, as I suppose one should say.

They say that Paris is all about falling in love, but as MisterMac and I fell in love in Paris years ago (actually it was Birmingham, but let’s not let the truth get in the way of a good story) I am not in Paris looking for love. However, I have to admit, I have fallen a little bit in love today with a man I’ve never met.  I’ve always been a fan of Hans-Peter Feldmann and (no surprises here) I have a nice little collection of his books, Smoke being my favourite. So, naturellement, it was inevitable that whilst in Paris, I would visit his exhibition at the Galerie des Galeries. Oh how this man is on my wavelength. He brings new meaning to the word ‘stuff’ and his stuff includes a long, long row of delicious, delectable shoes, although I don’t think they’re his. And if that’s not enough to excite a girl, the man is a master of the short story, a fact I did not know until today, when I bought a copy of his slim volume Blau.

In other news from Paris Photo, there was the expected mix of the classic, the avant-garde, and, rather more than expected not-sure-I-get-that. The boundary pushing continues unabated and there is some, let’s say, ‘interesting’ stuff to be had to decorate the living room wall.

Being something of a bookaholic, I quickly find myself drawn to the 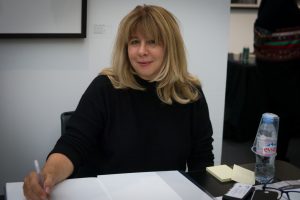 book stands. Since wpnewington went to all the trouble of lending me a super-large suitcase, it would be churlish not to fill it, and I’m doing well on that front. The highlight of the afternoon was meeting the lovely Karen Knorr signing her fabulous book Gentlemen. I first encountered Karen’s work with Marks of Distinction and have been a groupie ever since. If you’re looking for a present for a photographer chum, then look no further than Gentlemen.

In between all the fun of the fair, the phantom pen continues to scribble, in cafes, on the metro and I’m dictating parts as I walk around the city – never a moment wasted.  I was delighted to pass the half-way mark with this morning’s upload, so that’s more than 25,000 words in the bag. Being new to this novelling malarkey, I’m trying terribly hard not to slip into clichés, so for the part set in Paris, I have avoided the moustachioed, beret-and-Breton-jumper-wearing onion seller who rides a bike and lurks under le tour Eifel (although be warned, there is still time). What is not so easy is avoiding hackneyed phrases and I’m mindful that the faster I’m writing, the more hackneyed it’s becoming. My worst sentence of the day was: ‘I hated it when Dick was cross with me’. I almost felt the next sentence should have been ‘Uncle Quentin remained locked in his laboratory so that he didn’t have to put up with his daughter’s insufferable cousins while the long-suffering Fanny produced another picnic of sandwiches washed down with lashings of ginger beer’. I did manage to resist, although it would have added an extra 34 words and, on planet NaNo, every word counts.  And 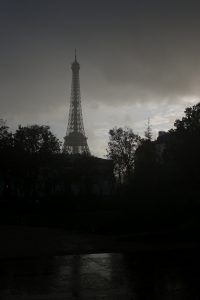 photographically, I don’t care if it is a cliche – the Parisian icon still works for me.