The City Of Lanterns

The City of Lanterns*

Český Krumlov (CK) is a chocolate box, magical, medieval city in the Czech Republic, and I must admit, I’d never heard of it until it popped up in a newspaper article. A UNESCO world heritage site, there are two sides to CK and I’m curious to know which way it will eventually tip. On the one side, the city is a tourist magnet – it was almost impossible to move through the main square given the number of coaches that had just deposited their loads of Japanese tourists, complete with selfie-sticks. Furthermore, there is no shortage of souvenir shops selling the same “genuine” plastic kitsch that can be found in tourist destinations the world over. Notwithstanding, CK has retained much of its dignity and, for a photographer, it is the most delightful place to spend some time. First of all, there are endless photo opportunities. The architecture is staggeringly beautiful. CK has been lucky in that in its 700 year history, it has never been destroyed by fire or war, so the buildings are actually authentic. There are any number of quaint cobbled streets, quaint shops and quaint wooden bridges. Cafes hug the banks of the River Moldau and with a picturesque castle dominating the backdrop, a weir in the foreground and churches galore in the middle distance, there really is something for everyone.

Secondly, CK offers a wealth of art exhibitions – a surprising number for a town with a population of only 14,000. The most famous (or rather infamous) artist was the controversial Egon Schiele. A figurative painter, Schiele left Vienna to take up residence in CK, much to the delight of the local denizens. Their delight, however, soon dissipated when they realised exactly what the artist was doing with the teenage girls clamouring to model for him. But with time, comes forgiveness and the main exhibition centre has now been named in his honour.

The city’s native artistic superstar was Josef Seidel – a portrait and landscape photographer of the early 20th Century, whose collection of 140,000 glass negatives has provided scholars with an invaluable socio-historic record of the Bohemian people and land. His house, now a museum, is well worth a visit, where his dark-room and studio – not to mention all those negatives in the attic – are just as they were 100 years ago.

If vintage photography’s not your bag, then a trip to the Dom Fotohaus is recommended. The gallery houses a permanent collection by Czech artist Jan Saudek. There is no doubt that he is an absolute master of hand-colouring, which gives his images an exceptional vibrancy and I was seriously impressed by the way he’s pushed boundaries with regard to nudity, but I’m afraid the semi-naked children posing in rather grown-up positions left me feeling distinctly uncomfortable and slightly sad.

But at least CK has a good cure for sadness in the form of the trdelník. And I reckon we found the best one in town. A trdelník is a very light dough that is dusted with spicy sugar and then toasted – not only was it indulgently delicious to eat, but its preparation, as it was wound around the toasting rod, provided yet more photo opps.

I plan to make a return visit to CK one day as I’m curious to see whether the town’s artistic heritage survives or whether it becomes suffocated by “Monty Python” tourism where the shops end up selling 3D photos of the Pope, over-priced Manchester United shirts and mass-produced, over-saturated paintings of places that aren’t even in the Czech Republic. At the moment, CK is teetering on the brink. 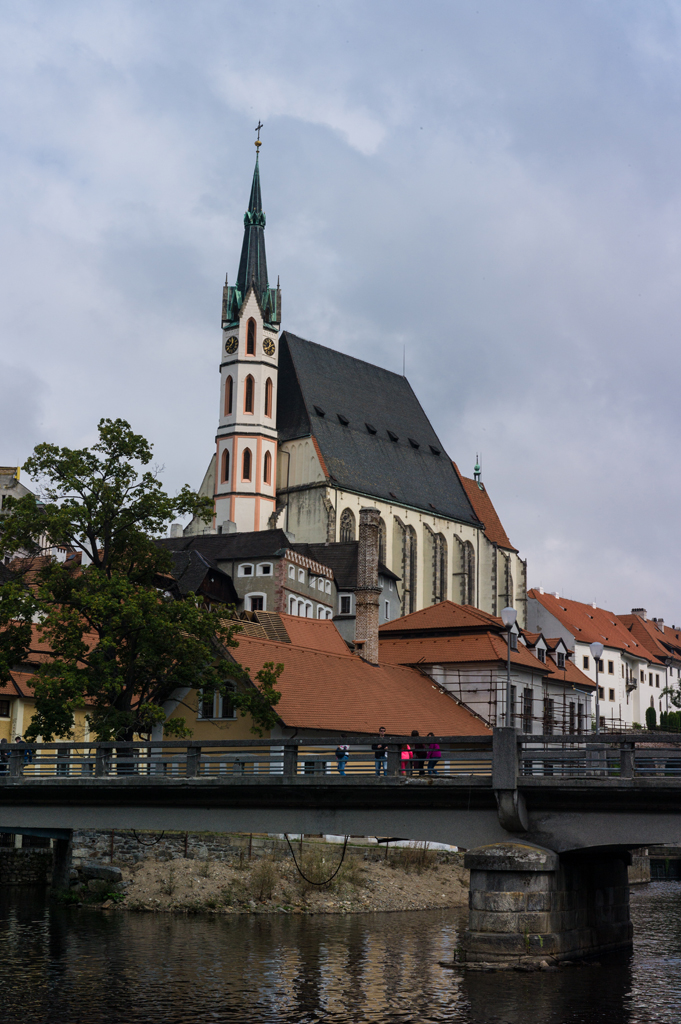