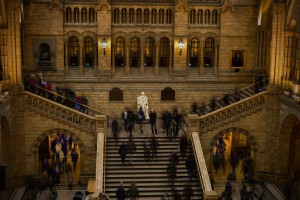 Today’s pic of the Natural History Museum represents linguipotence – ‘mastery of language or languages; ability to use language'(OED). This wasn’t the easiest word to shoot, so forgive the somewhat tenuous link, however, it does sort of work on two levels. First of all, some of those boffins at the NHM have probably mastered Latin, so that they can accurately tag all the exhibits. My Lightroom catalogue for today will show tags such as dinosaur, whale and spider whereas the boffin catalogue will have deinocheirus, tyrannosaurus rex, pterodactyl, balaenoptera musculus,araneae etc. Secondly, the statue on the staircase is Darwin, who theorised – inter alia – on the origins of language. And one of his greatest opponents, in this area, was the philologist Max Mueller, who was pretty handy in all sorts of languages!