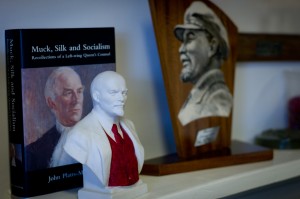 Today’s OED word of the day is agerasia – ‘the quality of not growing old’ (OED). This was always going to be a tough one, but I figured that anyone who died young and was immortalised in a statue, would fit the bill. A trip to the Society for Co-operation in Russian and Soviet Studies provided the very thing – a bust of Lenin. He still looks as young today as he did in 1924 – the year of his death. In fact, six days later and it would have been the 90th anniversary of his death.