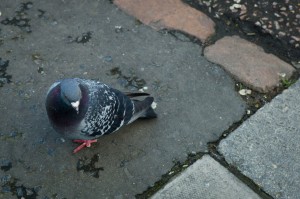 There is a hawk in Chelsea that is used to keep the pigeon population at bay and I don’t know whether it was about today or whether the pigeons were just keeping out of the cold, but whatever the reason, our feathered friends were noticeable by their absence. In fact, I only spotted one – this wannabe angry bird with a missing toe. I was keen to find pigeons today, as I thought they would be good for the OED word of the day, which was roucoulement meaning ‘A soft cooing or murmuring noise, spec. the characteristic sound made by a dove or pigeon.’ (OED) Now I’m no bird expert, but I reckon you need at least two if they’re going to coo to each other.  Apologies for the aerial shot, but there was rather too much merde de chien to allow kneeling or crouching.