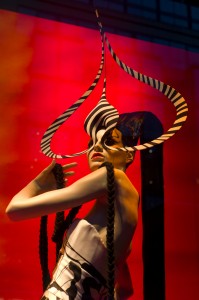 The OED chose a relatively recent “word” for today’s word of the day, namely OMG. At least, it’s recent in terms of being admitted to the OED (March 2011), but … its usage is far older than that. I must admit that I would have said that it first appeared on American television in something like Friends, and I would have been wrong, for it was first used by J A F Fisher (according to the OED) in 1917, when he wrote ‘I hear that a new order of Knighthood is on the tapes – O.M.G’. Anyway, OMG is an interjection meaning ‘expressing astonishment, excitement, embarrassment, etc’. It can also be used as an adjective or noun. I figured that OMG would definitely be the interjection (or even the ejaculation if Billy Bunter were involved) in response to seeing someone wearing this fascinator. I have to also confess to no photographer input on this one – any creativity is completely down to the work Mr H A R Rods.