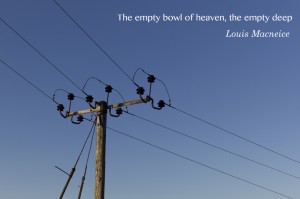 There are at least ten definitions of the word pylon, but the OED’s choice of the day has the meaning: ‘The monumental gateway to an Egyptian temple’ (OED). As I was in the darkest depths of the Cotswolds, there was not much opportunity for finding Egyptian temples or, in fact, many of the other meanings of the word. There is also a distinct lack of electricty pylons, telephone masts or anything else that might be considered a blot on the landscape (note to inhabitants – it’s no good successfully protesting against plans for a mobile phone mast and then moaning that you can’t get a signal). There are, however, one or two poles that could be arguably deemed to be pylonesque, if not the real thing, and that is today’s choice. In order to make it truly pylonesque, I’ve added a few words from Louis Macniece – one of the so-called Pylon Poets.