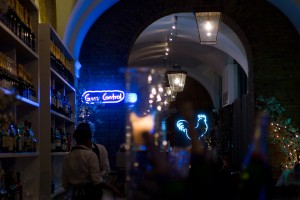 A bit of poetic licence required today! At first sight nun seemed straightforward enough, but closer inspection revealed that the OED was not referring to the noun in habits, but rather to the transitive verb meaning ‘To confine or shut up as in a nunnery’ (OED). The attestations don’t suggest a necessarily religious meaning, but chastity is certainly implied. Well, I’m not sure chastity and Chelsea go together, so I thought that an approximation of ‘confined to barracks’ would be suitable. Therefore, today’s pic is the Mess Cafe (part of the Saatchi Gallery) in the building that was once the home of the Duke of York barracks. A slightly circuitous journey to capture today’s word, but got there in the end!

Day #7 of a 365 project where the daily pic is informed by the OED word of the day.