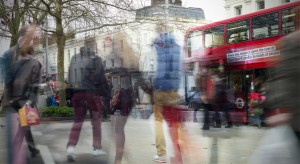 According to the OED, today’s word of the day – nullifidian – is ‘A person having no faith or religion, an atheist; a sceptic in matters of religion’. Now obviously, I can’t say whether any of these people are nullifidians or not, but judging by the way they were spending the sabbath swooping on the sales and not in church, there’s a very good chance that one of them is indeed nullifidian (the word can be an adjective or a noun). Alternatives for today were anyone in religious garb (which would have been an antonym of nullifidian), Santa (not many around on account of it being twelfth night) or a selfie (definitely out of the question owing to a puffy eye resulting from a minor incident with a misplaced mascara wand).

Day #5 of a 365 project where the daily pic is informed by the OED word of the day.