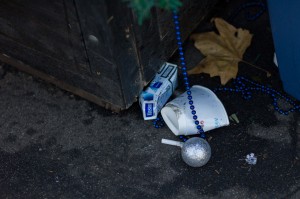 Today is the shortest day and if I ruled the world, Christmas would not be allowed to start until today. However, as I don’t, Christmas can start whenever it likes and I seem to recollect that I recorded its 2013 debut back in July or August. However, today’s advent pic is something of a vindication. The problem with early Christmas, is that it ends up with the dregs of the coffee cups and fag packets before its time. I did not have to look far to find this fallen bauble, some squashed stars, broken beads and a bit of fir tree lying amongst the debris.