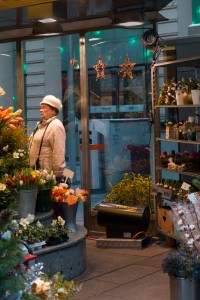 Not many to choose from today because of a near catastrophe. I can’t begin to count how many times I’ve removed the bottom plate of my camera to change either the card or the battery, and I thought it was now second nature. Wrong … we’d only been bummelling around the city for 20 minutes when I needed to change the battery and in the process, I dropped the plate. It landed awkwardly and when I went to put it back on, it had buckled and so would’t shut properly. Without the plate, the camera wouldn’t function. So using a key, I tried to put it back into shape and made it even worse. Many hours later, MisterMac found a suitable appliance and remedied the situation, by which time, the opportunities had come and gone. But at least I’m all set for Good King Wenceslas tomorrow!! Despite first glances, there is quite a lot of advent in today’s pic!