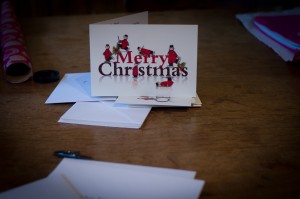 Christmas card writing in our household does not take long. We have managed to get the list down to 5 this year – preferring something electronic in poor taste (which will be winging its way out this week), but as e-cards don’t go down too well with the nonagenarians (I like this word, nice to know that if I live into my nineties, I can look bemused and say I’m a non-age something or other), who prefer a card in an envelope, we do send a few. I once had an acquaintance who kept a Christmas card book, in which she noted every card received. On the 30th November the following year, the cards were duly written and sent out to those who had sent in the year before. Woe betide anyone who missed a year – the red pen would savagely strike them from the address book. And I always thought that to strike someone from a Christmas card list was a metaphor.