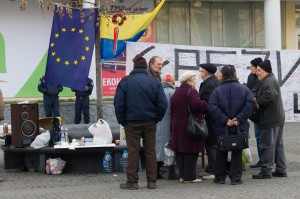 Days away from signing an association agreement with the EU, Ukraine’s President has backed out and instead wants to align the country more closely to Russia. This has led to uproar in Kiev as demonstrators took to the streets and clashed with riot police. At one point, according to the BBC, 100,000 protesters were out in force. In Dnipropetrovsk, the picture was slightly different as a small handful of protesters set up shop in one of the squares, and indeed, at one stage, demonstrators were outnumbered by the four policemen, who were not doing any clashing but rather standing around chatting and drinking coffee. It was all very good-spirited and very low-key. I was surprised at the poor attendance, given that everyone I’ve spoken to thinks a closer alignment with the EU will benefit the country. Some interesting hand-made posters, suspended from bits of string and held in place by clothes-pegs, were on display – I’ll be posting a few of these when I get home.