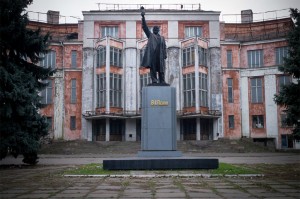 So what do you do with a building that’s shaped like a hammer and sickle? No one seems to know and this beautiful building has fallen into disrepair. Personally, I would turn it into flats, but our man in DNK says that nobody would want to live here and that the state of it is so bad, that it would cost too much to renovate, thus making the flats unaffordable. So the debate continues and nothing happens. Perhaps the authorities should try their luck on E-Bay? Interestingly, the statue of Lenin seems to be in pretty good nick – no pigeon crap or graffiti here.

Anyway, this was just one of the many exciting photo opps today, which also included a factory visit (foreigners AND photography were permitted) and a cafe that would not have been out of place in Lenin’s Moscow. More to follow on both of these when I get back to Blighty!