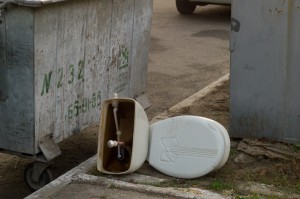 Dnipropetrovsk is a city of contradictions. It seems that it is quite permissible to take pictures of the rocket/missile factory, but absolutely forbidden to snap away in the shopping centres, which BTW comprise outlets such as Marks & Spencers and Gap. Another contradiction is the rocket vs toilet conundrum. This place is rocket city and the engineers are amongst the finest in the world, but – apparently – this engineering talent does not reach the plumbing. My friends have been complaining that every time they flush the toilet, it backs up through the waste-pipe of the bath. The plumber was called and assurances were made that the situation would be sorted and indeed, the plumbers have been hard at work, as we discovered on arrival at their flat to find their toilet unceremoniously dumped by the dustbins. Interestingly, the top of the cistern has already been “re-cycled” and I suspect it is only a matter of time before the rest of it finds a good home. I’m afraid that toilets featured again on today’s agenda. At my request, we had a meal in a typical Ukrainian restaurant that served Borsch and Chicken Kiev. However, the facilities left a great deal to be desired – they were what we would euphemistically describe as “natural position toilets” aka “squat bogs”. Sometimes, one has to be so thankful that one is Briitsh.