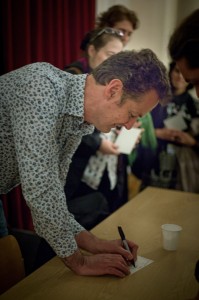 Signing autographs after his talk. What do Tim and I have in common? Pandas!

I wonder how baby panda is getting on – I have had no news of him recently. I expect he’s a lot bigger now, as they’re not called giant pandas for nothing! The Chinese are probably grooming him for dispatch to another zoo where he will sire balls of black and white fur. For those of you who have no idea what I’m talking about, it’s my love of the baby panda born a few years ago in Vienna. His parents were on loan from China and the deal was that any offspring had to be returned. We happened to be over there for the week leading up to his flight home and we went to the zoo every day to watch the process of the poor little love being separated from his mother and prepared for his flight box – a wooden crate cunningly disguised with bamboo and stuffed full of bamboo so that he couldn’t resist scampering in there. He was pretty smart, though, and seemed to know he was being tricked, as evidenced by his tentative steps into the crate and his swift re-emergence dragging the bamboo with him.