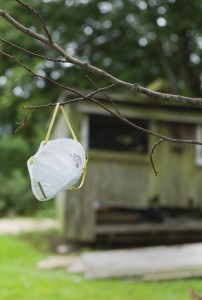 When were kids, we used to play in and on sheds covered with a funny white roofing. Some years later, we realise that the white stuff was asbestos. After many complicated logistical negotiations with the authorities, Nick and Wilcey packaged it all up and took it away for “re-cycling”. To save their blushes, I didn’t snap them in their ghost-buster suits, but instead chose Nick’s rejected mask – rejected as his beard wouldn’t fit in it:-)