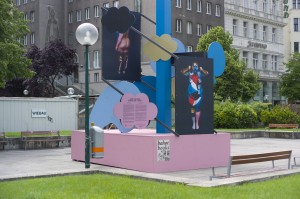 I shall leave the description of this to the artist: ‘With the installation Faggot on Vienna’s Morzinplatz, the artist Jakob Lena Knebl presents a temporary memorial to the homosexuals, lesbians, and transgender persons persecuted and murdered under the Nazi regime. She deliberately relies on discriminating terms such as “schwule Sau” (faggot) or “Mannweib” (bulldagger) used disparagingly and deprecatorily in everyday language. He employs these terms in the sense of Judith Butler’s view of the political discourse as performative and her hate speech concept, turns himself and his body into an exhibition and projection surface, and confronts the public in his installation. By appropriating the terms, she deprives them of their offensive impact to which homosexuals, lesbians, and transgender persons are exposed to and forestalls her vis-à-vis’s verbal insults against herself.’