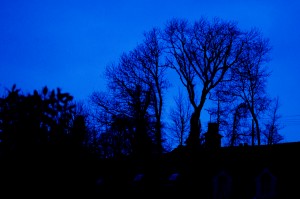 And yes, it is not Stonehenge, but it was supposed to be. I used to be good at map-reading, but since I’ve had SatNav, I’ve become somewhat lazy. I had a meeting on the south coast today and was slavishly following the SatNav, but my instinct told me that it didn’t feel right and indeed, it wasn’t. Somehow my bag had hit the gadget and it had automatically re-set itself for home. So after turning back and re-tracing my route, I decided that when I did drive home, I would follow the map and signposts. I decided to take the scenic route as I thought this would take me past Stonehenge, but it didn’t. Therefore, the camera remained under wraps until I opened the garden gate and decided I’d better snap something. So,instead of ancient stones, we have a silhouette of the house.