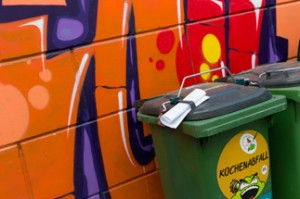 The highlight of the day was definitely the conversation over dinner, when we discussed how travelling today is far more strenuous than we ever expected it to be (aren’t we all supposed to be zooming around in little capsules and not undergoing security searches at the airport because the Kindle has set off an alarm?). Well the conversation eventually turned – via a discussion about the reality (or otherwise) of teleporting – to the 1986 David Cronenberg film, The Fly. It was suggested, that if I were ever teleported, that me and my camera would go into the pod and out would emerge a hybrid creature of half-me, half-Leica. … Bring it on! Sadly, as this is a mere fantasy, there is no pic to substantiate it, so we have to settle with this splash of urban art, which is at least cheerful!