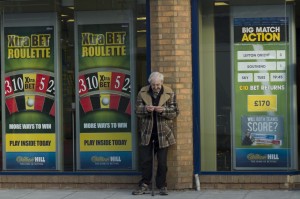 I was in the vicinity of Askew Road for a workshop and, as I was early, had a potter to take some snaps.  I noticed that the street was rather different from those in Chelsea and was mentally noting the differences.  The main difference was that Askew Road has two funeral directors and I can’t even think of one in Chelsea – maybe they’re hidden?  Anyway, I wasn’t going to have a funeral parlour as my daily post (although I am a fan of Six Feet Under), so it’s the bookies instead.