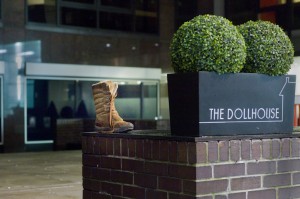 Funnily enough, this was probably the most interesting hour photographically, simply because of the sheer variety. Having spent most of the previous hour in the bar, we needed to get a few shots under our belts – photo shots not tequila shots – before hitting the Polo Bar for full English. The Heron Tower made a great backdrop for traffic trails with buses, old newspapers, contrasts of old and new – it was all on offer. I chose this shot for several reasons. As ever, the curiosity of an abandoned boot was sending my imagination into overdrive and I can only conclude that as the Dollhouse is a night club, that someone had travelled wearing boots and changed into party shoes on arrival, with one of the boots becoming separated from the other somewhere along the way. The Dollhouse is a night club – a totally bizarre oasis of happening in the eerie silence of the surrounding churchyard and deserted office buildings. The nightclub itself is a converted Victorian Turkish Bath designed by the architect Harold Elphick – another place to re-visit during daylight hours with the right equipment. I had my first security run-in here. The bouncer didn’t take too kindly to my tripod and demanded to see our images, which, of course, we didn’t show him. This part of the City is rather confusing as to what is public and what is private space, but I’m pretty convinced that I was on public space.