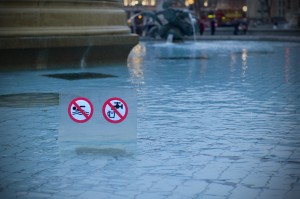 And they’re off … about 50 togs hit Trafalgar Square at 16.00 before heading down Northumberland Avenue, acrosss Hungerford Bridge and around Southbank.  I don’t have many images for the first hour.  First, I had to nip home to dump my costume (I soon realised that a bobbleless bobble hat with thermal lining was going to be eminently more practical than a Victorian bonnet).  Secondly, I did spend a lot of time on the ‘phone trying to describe, to people who were late, where we were.  @The chap whose name I didn’t catch – I hope you caught up with us, because I suggested meeting you at the statue, but the world, his wife and some VERY odd (and rather scary) street artists had also decided to gather there.

I chose this pic to represent the hour as it was the start of the marathon and the sign made me chuckle.  The complete absence of people swimming in the fountain might just have had rather more to do with the freezing January temperatures and less to do with the sign, I thought as I stood there in my warm thermals (God bless Icebreaker and their Bodyfit clothing).  And as for drinking the water … why would I?  Not when I have a decent brandy in my hip flask!