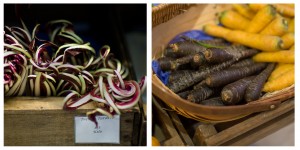 Well you learn something new everyday and today I learned that there were two vegetables that I have never heard of.  The first is tardivo – apparently some kind of radicchio, although it looked like a sea-creature that had escaped from the fishmonger’s next door.  The second is something called rainbow carrots.  Apparently this is what carrots used to look like before they were orange.  Well, I like carrots so thought I’d try them until I saw that they were nearly £6 a kilo compared with orange carrots at 85p a kilo.  Sampling of the rainbow carrots will simply have to wait for another day, but I’m curious to know if they are rainbow coloured inside or whether this is just a euphemism for mud coloured. And how did I happen upon all this fascinating knowledge?  I popped into the greengrocer’s for some celery and parsley – neither of which they had, incidentally.