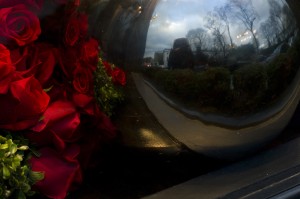 Always on the lookout for reflections of Chelsea, I was taken by the roses reflected in this massive silver bauble in a shop window along the Fulham Road.  The light first thing was perfect – that sort of wintery, Turneresque light and so MisterMac and I planned to go shooting down on the Embankment.  By the time we’d had another cup of tea and planned our route, the watery light had been replaced with thick grey cloud and after a fairly short mooch around, we ended up going to the cinema instead.  Gambit with the divine Colin Firth – what more could a girl want on a Saturday afternoon?  I think the words that best describe the film are a jolly good caper.