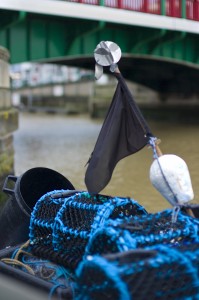 Despite the dire warnings of relatives, the girls set off on their road trip.  We’d planned it and the wind and wuthering were not going to stop us.  Originally, we’d intended to drive up the Welsh coast and overnight at Barmouth – my last trip to Barmouth was at the age of 16, when I worked as a waitress in the Copper Kettle (which BTW, I’ve just googled and can’t find – although it might have been a Welsh name like Y coerso geddol) and discovered the joys of coloured Sobrani and frothy coffee (we didn’t have Italian names for frothy coffee in those days).   Anyway, the forecast for Wales was particularly dire and the only patch of coast that seemed relatively calm was Weymouth and so Weymouth it was.  After a few snaps along the harbour – the lobster pots were full of rather more used condoms and cigarette ends than crustaceans, but still made for nice folksy pix – we headed to Portland Bill for the lighthouse at blue hour.  Even my sturdy weighs-a-ton-Manfrotto was no match against the gale force winds and I have a set of rather wobbly lighthouse images.  By this time the driving rain sent us scuttling for cover in the Bongo and in search of accommodation.  I could write a whole thesis about hotel receptionists’ attitudes towards two drowned rats crawling in off the street, but we found a friendly welcome, a log fire and a decent Pinot Noir at the Royal Lion Hotel in Lyme Regis.